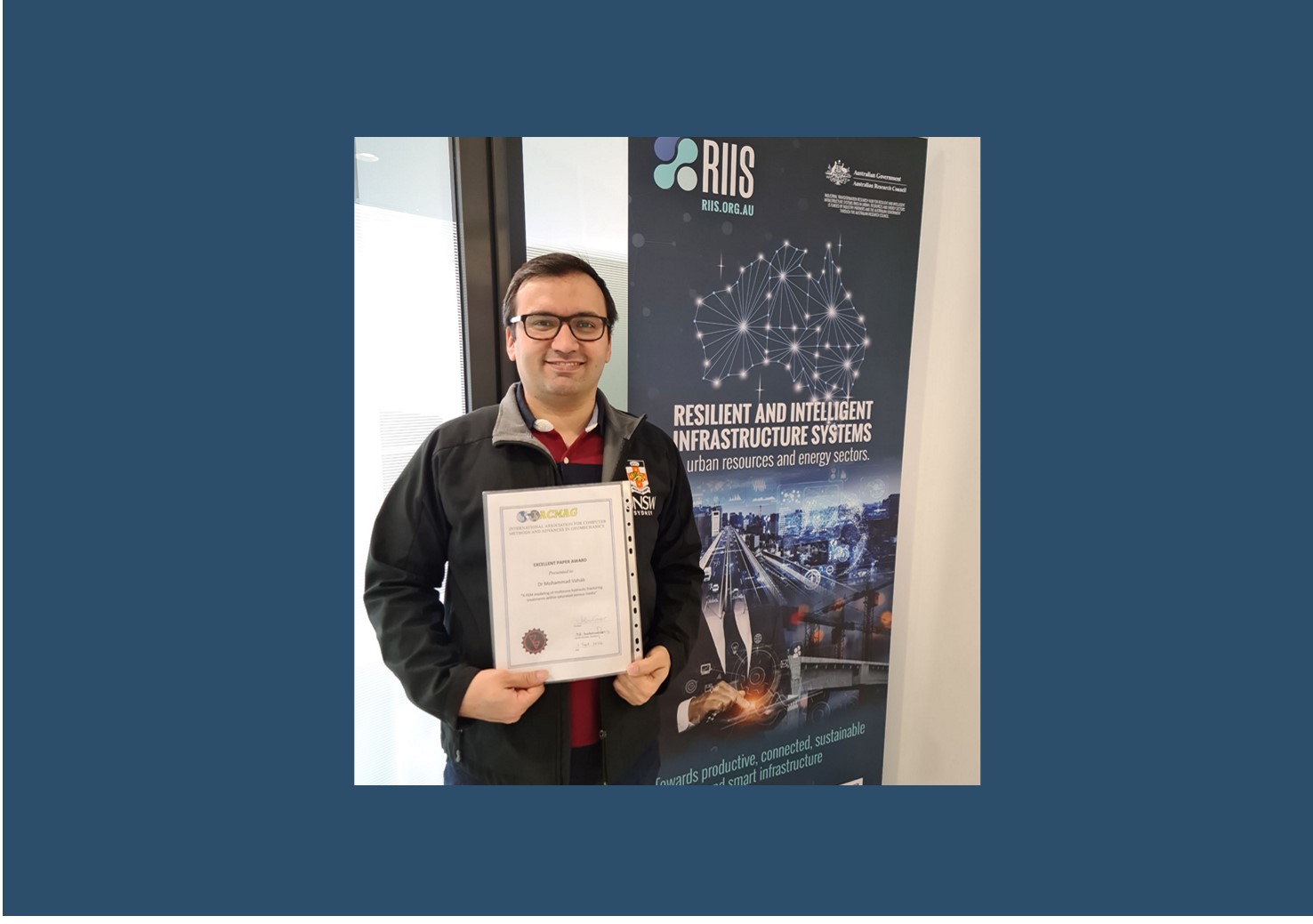 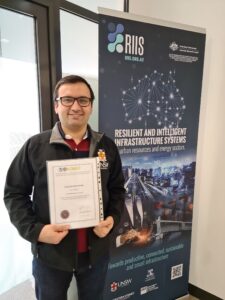 RIIS Chief Investigator Dr Mohammad Vahab has been awarded a prestigious award for early career researchers from the International Association for Computer Methods and Advances in Geomechanics (IACMAG).

Mohammad received the ‘Excellent Paper Award to Junior Individuals (45 years and under)’ for his paper “X-FEM Modeling of Multizone Hydraulic Fracturing Treatments within Saturated Porous Media”, published in Rock Mechanics and Rock Engineering (2018) 51:3219–3239.In this paper, a fully coupled hydro-mechanical model was presented for the study of multizone hydraulic fracturing. Several numerical examples were presented to demonstrate the robustness of the proposed X-FEM framework in the study of multizone hydraulic fracturing treatments through saturated porous media. The results appear to accord with the field observations reporting numerous failed attempts of multistage multizone fracturing treatments, which provide a great insight into the complexities encountered in practice.

The IACMAG Excellent Paper Award recognises excellent research contributions published through refereed paper(s) in archived journals.  This prestigious award is granted every three years to 5 early career researchers in the field. The nominated research should be of high quality and may be in a wide range of subjects in geomechanics/geotechnics, including areas such as analytical or numerical methods, constitutive modelling and testing, and important practical geotechnical applications.

IACMAG was established in 1988. It has organized successful international conferences approximately every three to four years since then.

Dr Mohammad Vahab received his PhD in Civil Engineering from Sharif University of Technology in 2015. He immediately joined UNSW, Sydney as a research associate in Geotechnical Engineering, where he is currently employed as a lecturer. The focus of his research is numerical simulation by employing the state-of-the-art computational methods, namely:

Mohammad specializes in the hydro-mechanical coupling processes in saturated/unsaturated porous formations. This involves the development of physical models as well as advanced computational frameworks in relation to the hydraulic fracturing treatments in neat, fractured and/or layered domains.

Geomechanics is an interdisciplinary area that involves the study of natural and man-made systems with emphasis on the mechanics of various interacting phenomena. It comprises aspects of various engineering and scientific disciplines such as civil, mechanical, hydraulic, materials, and geological engineering and geophysics, with appropriate scientific foundations in mechanics and physics. Some of the specific subjects involved are soil and rock mechanics, statics and dynamics of interacting structures and foundations, oil and fluid flow through porous media, environmental geotechnology, offshore and marine technology, geothermal energy and ice mechanics.

Geomechanics: an integration of old and innovative technologies
Geomechanics has the potential for developing innovative technologies, and providing challenging careers to outstanding people. It covers both fundamental and practical aspects, and recognizes the need for a rational process of simplification through integration of theory, experiments, and verification for the development of procedures for solution of practical industrial problems. Geomechanics, with its emphasis on both basic and applied aspects, and its interdisciplinary nature, is capable of participation in and integration of emerging scientific and technological developments so as to contribute to a wide range of areas.

No comments to show.